Bioactive materials bind to tissues through the formation of a layer of apatite on theirs
surface. When implanted in bone, nucleate and in vivo apatite grows on the surface of the material and the newly formed bone binds together to form a stable and effective bone-implant bond. This indicates that an important requirement for an artificial material to bind to bone is the ability to form a hydroxyapatite layer on its surface ([Ca10 (PO4) 6] (OH) 2). Starting from these considerations, the bioactivity of the materials can be evaluated in vitro with a procedure, proposed by Kokubo et al. [1], which consists in immersing the samples to be tested in simulated physiological solution (SBF), a cell-free solution and do organic substances, but with an ionic concentration similar to that of human plasma, and in the observation of the formation of a hydroxyapatite layer.
Figure 1 shows the comparison between the ionic concentration of human plasma and of the simulated physiological solution (taken from the bibliographic reference [1]).

A direct correlation between the ability of a surface to promote the precipitation of hydroxyapatite in simulated physiological solution (SBF) and the ability of the same surface to bind to bone in vivo [1, 2 ]. 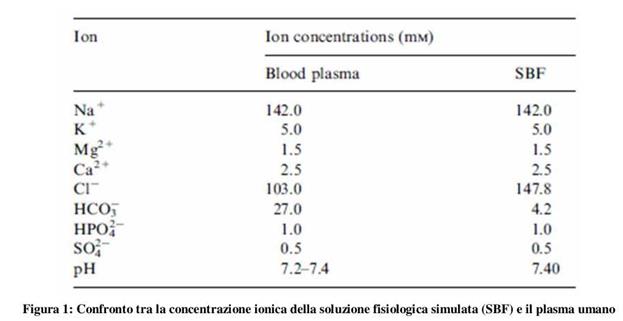 To evaluate the bioactivity of superficially modified screws, each sample was immersed in 25 ml of simulated physiological solution (SBF) and kept at 37 ° C for 15 days. The solution was refreshed every 2 days to simulate the natural turnover of physiological fluids, and the pH of the solution was measured.

At the end of the SBF immersion period the screws were rinsed in double-distilled water, to remove any residual salts not tied to the surface, left to dry in the air and then glued onto suitable supports for subsequent SEM observation.
Below are the SEM and EDS analyzes of three screws following immersion in SBF. The screws have been chosen so as to have different surface characteristics.

SEM observation of the vines following the in vitro bioactivity test

The vine showed no evidence of hydroxyl groups exposed on the surface. The surface was characterized by the typical sandblasting morphology. The EDS has shown significant signs related to aluminum and silicon, probably deriving from sandblasting. 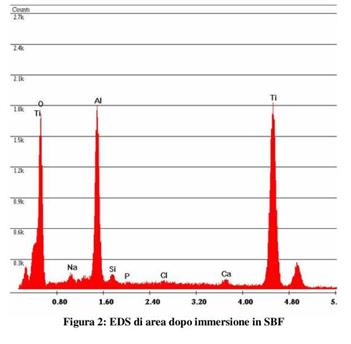 The vine had an evident modified surface layer, the basic morphology is similar to that of a sandblasted surface with attenuated asperities, significant signals of aluminum and silicon are observed, a significant signal can be observed relative to the presence of hydroxyl groups exposed in surface. 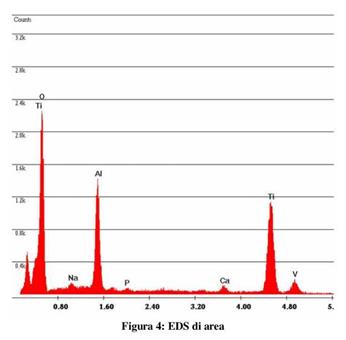 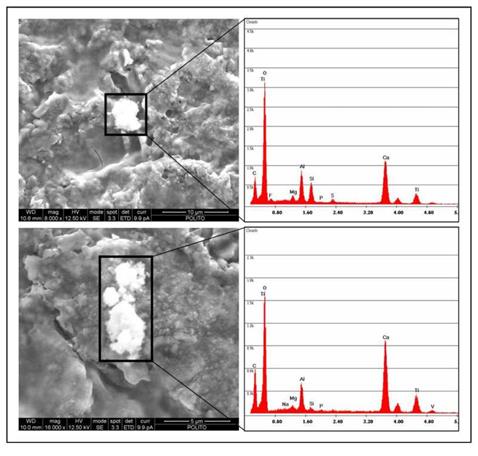 For all the screws the precipitation of calcium-rich particles is observed, to a greater extent in the hyperoxidized sample, phosphorus is practically negligible.
The morphology of the particles is polygonal and sharp-edged rather than rounded
and “cauliflower-shaped”. It is therefore not possible to identify them as hydroxyapatite, but more likely as calcium salts.

In conclusion it can be affirmed that the examined hyperoxidized screws show a superficial deposit which appears as compact (ie not spongy) and of more relevant thickness in the case A. The sample was subjected to the optimal exposure treatment.
On all the examined screws it was observed that it is well adherent to the metallic substrate. This deposit is electrically non-conductive. From the chemical point of view it is composed of an inorganic part containing Titanium oxide, strongly hydroxylated. Moreover, the presence on the surface of alumina is assumed, deriving perhaps from the treatment of sandblasting, and silica. Given the presence of these elements the results were subsequently checked with previously analyzed and decontaminated samples.