In this section the behavior of osteoblastic cells on titanium surfaces characterized by different finishes was evaluated.

In particular, in this work, cellular behavior has been evaluated on the following types of surfaces:

The evaluations carried out, as described in detail in the following section, were:

This measure tells us how the cell gene machine responded to stimuli constituted by contact with the surface and the growth medium. In function of these stimuli, the cell “turns on” (up-regulates) the genes that issue the commands to synthesize a given protein. The measure consists in isolating the messenger RNA produced by the cell, “retrotransscribing” it to DNA, and assessing how much of it corresponds to the portion of DNA (gene) of interest to the system under examination. In this case, the genes that govern the production of collagen I, alkaline phosphatase, osteocalcin, sialoprotein and bone-2 morphogenetic protein (BMP-2) have been taken into consideration. Furthermore, the expression of the RunX2 gene, implicated in the cell differentiation process, was analyzed.

The experimental materials consisted of Titanium discs, 5 mm in diameter. In particular the following types were present, as already discussed in the previous point:

The tests included the evaluation of cell adhesion by SEM at 5 days and the RT-PCR measurement at 3, 5 and 10 days. They were performed according to the following methods:

The cells used for the adhesion test are osteoblastic cells from human osteosarcoma; in particular, these are the cells of the SaOS-2 line. Cell adhesion tests were conducted according to the protocols contained in the international bibliography.

SEM observation
The salient aspects of SEM investigations are summarized in Figures 1-7 (machined surface), 8-13 (sandblasted + etched surface), 17-25 (sandblasted surface + Lorenzon treatment). The images were taken after 5 days of growth. For each group, the first image is at low magnification (200 x) the others illustrate observations performed at 1000, 3000 and 5000 x, as shown below in the image. Starting from the machined surface, it is possible to observe the typical extremely flattened appearance of the cells: as described in the scientific literature on the subject, the great flattening and the high cell density are typical indicators of a phenotype not very differentiated in the osteoblastic direction. Notice how the underlying machined surface can still be seen in some images, even in a high cell density picture.

From the morphological point of view the cells grown on the surface subjected to sandblasting and acid etching (Fig. 8-13) have a markedly different behavior compared to the previous ones: in fact they occur at 5 days with a more rounded and lower density shape. In this case the topography of the surface is clearly visible, with the characteristic roughness of the surfaces subjected to this type of treatment.

The cell growth on the surface subjected to the treatment of Dr. Lorenzon demonstrates a very high density, to the point that in no image it is possible to observe the original topography, contrary to the other samples analyzed. The cells do not exhibit the flattened and fibroblastoid morphology of those grown on the machined surface, but grow vigorously in multiple layers. From these observations and others not reported, it is possible to conclude that the superficial density of cells is greater in this case, indicating a likely higher growth rate. 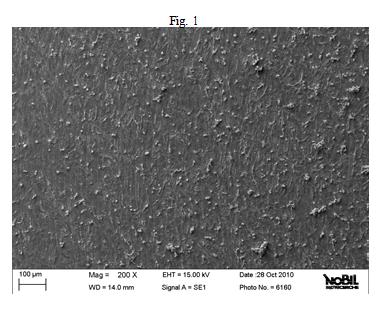 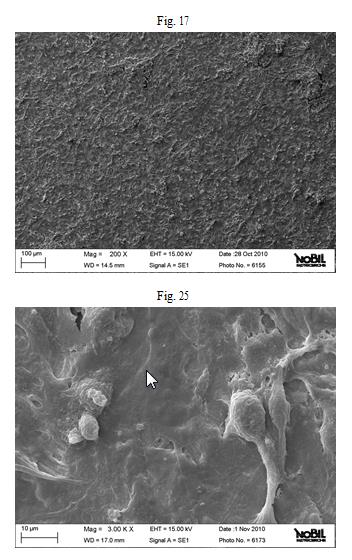 In gene expression assessments were evaluated:

The results obtained provided the following indications:
First, a different gene expression was actually observed on the analyzed surfaces. An effect of surface characteristics on cell differentiation was therefore confirmed. The data obtained, shown in figures 26-28, indicate the expression of a given gene with respect to what was observed on the machined surface. In general, several key genes are overexpressed on the surface with Lorenzon treatment, already at three days. Undoubtedly, for each experimental time, this surface has a greater expression relative to the genes analyzed.
This data, combined with the observation of a greater cellular density on the same type of surface, indicates a greater cellular activity, in an osteoblastic sense, for this type of finish. 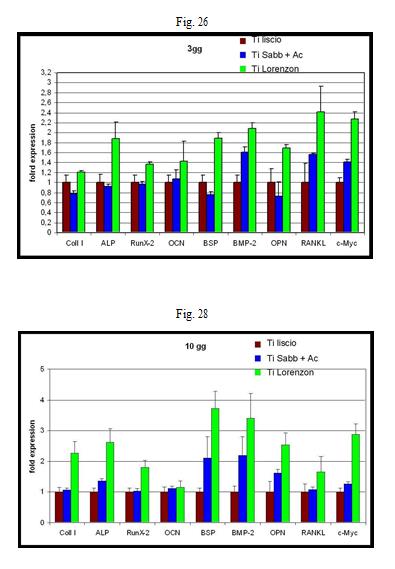 From the results of this work it emerges that the different surface preparation procedures significantly influence the interaction of the analyzed SaOS-2 cells with the titanium substrate. In particular, the interaction with the surface causes a significant overexpression of some key genes for osteogenic activity on the surface subjected to the treatment of Dr. Lorenzon. The same surface is the one that presents, after 5 days of growth, a greater cellular density, together with a non-flattened morphology different from that observed on the machined surface.

The surface of Dr. Lorenzon therefore, within the limits of the present in vitro experimentation, presents very suitable conditions for the promotion of osteogenesis at the implant / bone interface.

After 5 days, the Lorenzon sample underwent staining to highlight Ca and P deposits 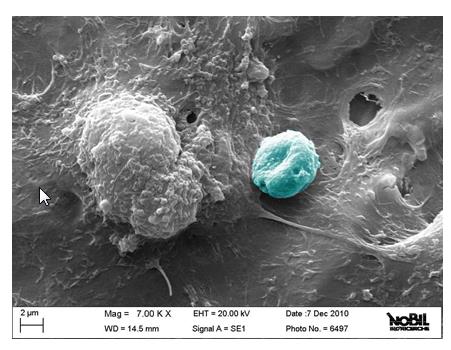 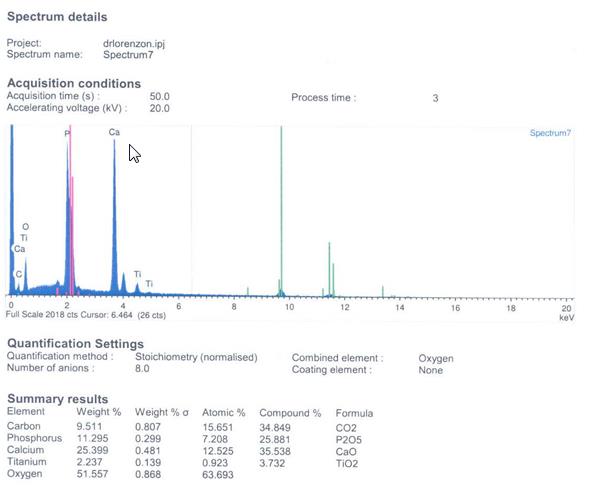