In this paragraph the behavior of human mesenchymal cells on implants is evaluated titanium characterized by three different titanium surfaces. One subjected to simple sandblasting, the second SLA and the hyper-oxidised side according to the author.
Human mesenchymal cells are a population of multipotent cells located within the bone marrow, and play a fundamental role in the osseointegration process. They in fact migrate from the bone marrow to the implant site and preside over the generation of new peri-implant bone tissue. The mechanisms that induce osteogenic differentiation of mesenchymal cells have not yet been fully clarified; a key role is played by the influence of chemical stimuli (growth factor ß3, insulin, etc.,). For example, when mesenchymal cells are grown in vitro in the presence of salts of ascorbic acid, ß-glycerophosphate, synthetic glucocorticoids such as dexamethasone, they take on an osteoblastic phenotype and secrete an extracellular matrix in which calcium phosphate is then deposited in the form of crystals of hydroxyapatite.
Among the stimuli that can induce osteoblastic differentiation of mesenchymal cells also include those possibly exercised by topography and the chemical composition of the implant surface. The effect can be either direct (for example, an eventual action of superficial topography on cell morphology and behavior) or indirect (eg a given implant surface can adsorb proteins or, in general, biomolecules from the external environment). promote cellular differentiation).
The study of the evolution of differentiation towards the osteoblastic phenotype of mesenchymal cells on titanium surfaces can therefore provide an interesting in vitro model of the processes that govern bone regeneration in the peri-implant site.
By comparing their behavior on different types of implant surfaces it is possible to evaluate how the surfaces under examination support and assist the cellular differentiation induced in any case by the culture medium.

The experimental materials consisted of monophasic titanium implants, 5 x 23 in size. In particular, the following types were present:

– sandblasted system (coded SABBI in the rest of this report)
– hyper-oxidized plant, ie the previous type subjected to treatment by dr. Lorenzon
(coded LORENZON in the rest of this report)
– implant with SLA surface. This typology was obtained by subjecting the sandblasted system to a double acid attack treatment. The SLA surface, used by Straumann implants, is considered a golden standard both for the excellent properties demonstrated and for the vast literature that describes the effect on the behavior of various types of osteogenic cells (coded SABBIATO + ACIDATO in the rest of this report).
For each type, 18 systems were supplied. The test included three experimental times, at each time the following measurements were performed:

[The cells used for the test are mesenchymal cells from normal human bone marrow (HMSC)]
The purity of the cell line and the ability to differentiate in the osteogenic, chondrogenic and adipogenic direction have been verified by flow cytometry.

They have been evaluated

2. Collagen I (Coll I) considered an early marker of osteogenic differentiation
3. Alkaline Phosphatase (ALP), this gene controls the production of alkaline phosphatase, that is
the enzyme used to obtain the mineral part of the bone matrix construction
4. RunX2, a gene linked to cellular differentiation
5. (OCN) The gene that controls Osteocalcin synthesis
6. The gene that controls the production of bone-2 morphogenetic protein (Bone Morphogenetic Protein-2, BMP-2), a member of the Transforming Growth Factors family, and a powerful stimulator of osteogenesis
7. The gene that controls the synthesis of Bone Sialo Protein (BSP) a highly specific glycoprotein of bone tissue
8. The gene related to ICAM, an adhesion protein present on the cell wall. 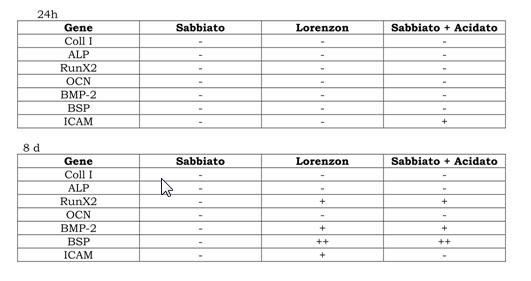 From a qualitative point of view, the data can be commented as follows:
– at 24 h after the introduction of osteogenic stimuli, no significant differences are observed between the surfaces. Only the gene that codes for the ICAM adhesion protein is marginally more expressed on the SLA surface (sandblasted + acid-etched).
– at 8 days, important differences are observed. Lorenzon surfaces and sandblasted +
acidate express significantly more RunX2, index of differentiation and, above all, BMP-
2 and BSP. The Lorenzon surface also has high expression of the ICAM adhesion protein.
– at 17 days, the sandblasted + etched surface is similar to the sanded one, while the surface
Lorenzon maintains an overexpression of RunX2, Osteocalcina (OCN), BMP2 and ICAM.
How can this data be interpreted? It is certainly reasonable to say that both Lorenzon and sandblasted + acid-etched exert a stimulating action on a cellular level higher than that of the sandblasted surface. In this sense, therefore, these two types of treatment must be considered as improvements, within the limits of an in vitro test, with respect to the sandblasted starting surface.
The action of the surfaces is not exercised so much at the level of the typical alkaline phosphatase marker (ALP), which is never different on the surfaces analyzed probably because its regulation is controlled by the osteogenic stimulation present in the culture medium. Rather, in this experimental model, the action of the surface takes place above all at the level of increased expression of BSP and BMP-2.
These results are in full agreement with what was reported, with a similar experimental model, from the literature of the sector1. In particular, BSP is necessary for osteoblastic differentiation and mineralization. Expression of BSP from cells of this type has been reported to predict bone formation in vivo2. BMP-2 is a potent osteogenic factor and the increased expression of BSP and BMP-2 suggests increased bone production and an increase in bone implant contact surfaces in vivo.
Moving on to the quantitative aspects, the following figure represents the detail of the data obtained at 8 days: 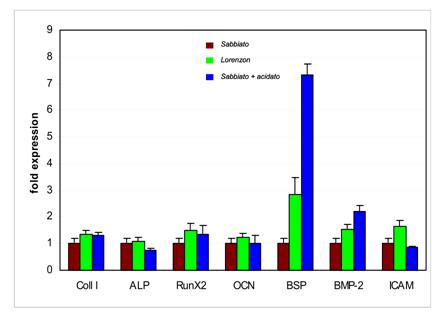 The graph represents the above, with BSP expressed 3 or more times on Lorenzon and sandblasted + etched with respect to only sandblasted and overexpression also of BMP-2 from the same surfaces. Quantitatively, the sandblasted + etched surface expresses even more than the Lorenzon surface, at this experimental time. It is however difficult to say if this further overexpression has a real clinical implication, while it is certainly correct to say that the two surfaces prove more active towards the cells than the sandblasted surfaces, as discussed above.
The following figures, in which the comparison is limited to sandblasted Vs Lorenzon, at 8 and 17gg, indicate very clearly that the hyper-oxidation treatment performed improves the characteristics of the sandblasted surface, causing the overexpression of genes of direct interest for the formation of bone at the tissue-implant interface: 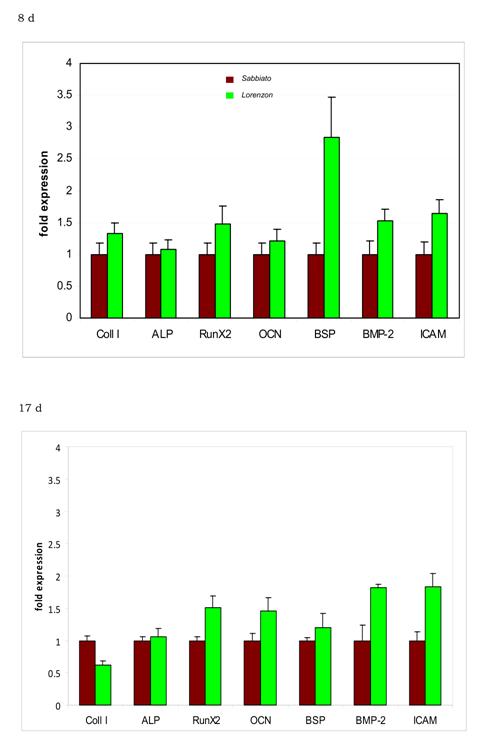 The decreased difference in BSP expression at 17 days can be explained by the fact that, having this protein now performed its task on the Lorenzon surface, the expression of the related gene is physiologically reduced. In any case, even at 17 days the Lorenzon surface maintains a gene activity profile that is clearly more favorable than that of the sandblasted surface. It is more difficult to establish relations with the sandblasted + etched surface at 17 days, whose quantitative data are as follows: 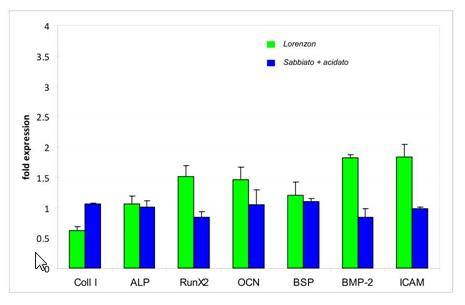 It should be noted that the significance threshold is around 1.5 fold expession. BMP-2 is surely more expressed on Lorenzon, while at 8 days it was on acid-etched + sanded which therefore could have “turned off” before this gene, because already expressed in abundance. It is therefore difficult to establish an effective superiority of one or the other surface, at this time, the indication remains that both behave very well, in an improved way compared to the sandblasted surface.