Under normal conditions the metabolic balance is easily and physiologically naturally maintained around the tooth that enjoys the anchorage mediated by the swelling. 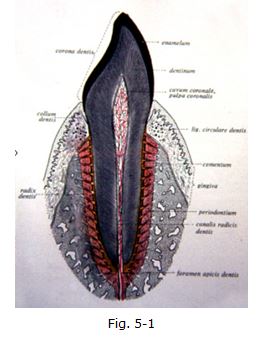 This particular articulation without apparent movements works with an extremely sophisticated mechanism. The periodontal space is buried in many microcavities within Sharpey’s fiber systems.

Within these cavities there is a layer of polyglycans. At the time of loading, the joint acts as a hydraulic shock absorber. In fact, polyglycans play a decisive role in physiology being subjected to a bidirectional pump mechanism between the intralegamentary space and the surrounding bone. At the time of loading they are pushed into the bone structure from which they are recalled in the release phase. The fragmentation of the interspace on the part of the fibers has the effect of reducing the value of the wall tension in accordance with the law of La Place. 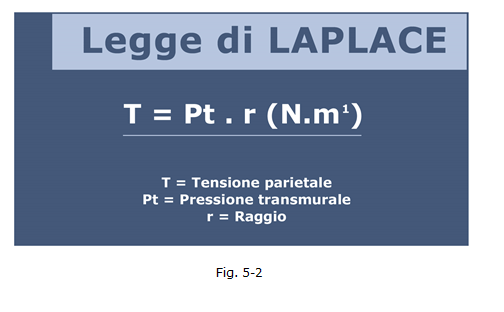 It is evident that the fragmentation under physiological conditions, reducing the diameter of the periodontal cavity, is a determining element in the reduction of the tensional state which does not therefore determine alterations in a catabolic sense. As we have already said, polyglycans play an important role in the damping system. They are also present around the plant. The works of Prof. James of the University of Loma Linda, in which the interface with an electronic microscope is analyzed, date back to 1974-1979. The data obtained confirm the body’s attempt to recreate the physiological function from the swelling around the implant.

Microfibre complexes with desmosomic attacks on the titanium surface have been highlighted. They are immersed in an anist lamina, formed by a layer of polyglycans. The attempt to recreate a defense physiology is natural, given the magnitude of workloads repeated over time.

The microfibrillary systems have no numerical entity in the directionality comparable to the periodontal ones. Especially with regard to this last figure, there is a clear prevalence of spiraling trends. Moreover, the marginal circular complex is completely missing, which is the determining factor in containing the spillage of the polyglycans subjected to the piston effect. Thus the peri-implant polyglycan pump presents a third direction given by the component that emerges at the marginal level. The confirmation of this phenomenon comes from a study by Prof. Zerosi of the University of Pavia. In a 1980 paper he analyzes the marginal tissues of the gingival collar describing a cytoplasmic alteration he called “pallonitis”.

In the various sections an increase in cytoplasm volume is described, accompanied by paling of the nuclei until their disappearance. This cellular variation allows us to confirm the emergence of the third directionality of the polyglycan pump. In fact, it is precisely the finalist attempt not to lose substance that induces a phagocytic function of the marginal cells which, following the establishment of a non-specific function, suffer until necrosis.

Through this indirect diagnosis it is possible to understand the physioistology of the perimplant. 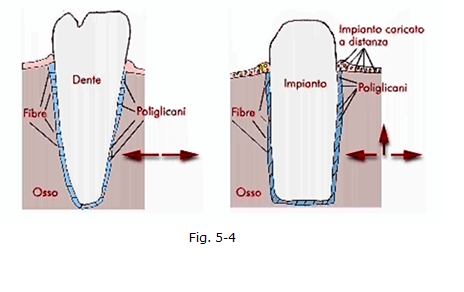 The dynamic vision of the integration of a plant, therefore, suggests a concept that overcomes osseointegration, which is consequently seen not as a point of arrival but as an intermediate step in the life of an implant.

We can therefore define:

Entering a surgical medical unit into a respecting organ

the physiology of the same

PHYSIOINTEGRATION OF A DENTAL IMPLANT

We have seen how it was possible to understand the physioistology of the bone-implant complex with an indirect diagnosis, the only possibility so far available to us.

Recently, thanks to nuclear diagnostics, we have the ability to evaluate the metabolic behavior of bone and periodontal tissues.